tl;dr “I dont want to read your article, I want to download the code” : Skip to this section of the article for the link to the Github repository.

Lately I started using Last.fm a bit more thoroughly. For those who don’t know what Last.fm is, it’s a webstite that allows you to “scrobble” (log) every song you listen to.
It’s cool because then you can have cool stats about your listening habits, but also discover new artists related to what you like (Spotify largely copied what Last.fm was doing, with the artist/album/song radio and “daily mix” playlists).

I was browsing the website and looking at what my friends were listening to, when suddenly I thought that it would be cool to be able to listen to what another user is listening to, at the same time. It’s a cool way to discover new music while relying on someone’s tastes isntead of the Spotify algorithms, that unfortunately often brings you the same songs that you already know too well.

I started googling, but unfortunately didn’t find anything remotely close to what I was trying to do, except a very old website called “overhere” that apparently did the same thing, but is now long dead.

So I knew I had to do it myself.

After a few moments researching the Last.fm API and the Spotify API, I came to the conclusion it should be doable and reasonably easy to do.

I ended up doing it in Python, since it makes such little scripts easy and quick to code, and libraries were available to interact with the aforementionned APIs.

Basically, the program checks what a user (of your choice) is listening to on Last.fm, and if he/she is listening to a song, it will search for it on Spotify, and play it, if available. At the end of the song, it does it again. Rinse and repeat.

And voilà, you are listening along a Last.fm user, to the exact same songs, at the same time.

Where to get it ?

You can find the code on this Github repository :
Hexalyse/LastFmListenAlong

Everything needed is explained in the README.md file.

A few days ago I was browsing the world wide web, when suddenly I stumbled upon an article speaking about an IC sensor made by AMS, called the AS3935 Franklin Lightnin Sensor, which could detect the electrical signature of lightning strikes up to 40km and give the “strength” of the lightning as well as an estimation of the distance to the head of the storm. And all this in a tiny 4x4mm SMD circuit designed to be embedded in personal weather stations, watches, cars, etc.

My nerd side was tickled and I suddenly wanted to buy one and build a lightning detection station that could tweet about incoming storms, using my Raspberry Pi which is lying on a table doing nothing most of the time. And so I did it ! What I ended up with is a Twitter account on which lightning strikes info is tweeted in real time, with energy and distance estimation : https://twitter.com/toulouse_orages

After some research, I found that Embedded Adventure was selling a module with a pre-soldered sensor with the right antenna and components added to the board, ready to be used via an I2C interface. Some more research and I found that somebody already implemented a Python library to use such sensors on a Raspberry Pi. Perfect ! We have everything we need. 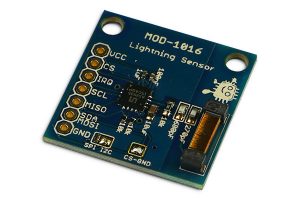 Wiring the sensor to the Raspberry Pi

Here is the wiring diagram to connect the sensor to the Raspberry Pi (you can use a different GPIO pin for the IRQ, but remember to change code accordingly):

Here is a picture of my setup. For now, it’s just a quick prototype set up on a breakboard : 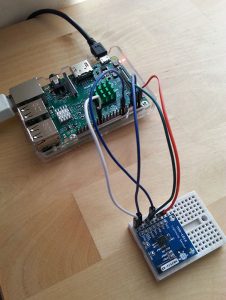 Writing the code to make it work

The Python library is pretty well self-documented, so just browse through the code and it should be enough. If you want to understand exactly how each of the sensor parameter works (Watchdog Threshold, Signal Rejection, etc, even some of which are not implemented in the library), refer to the AS9535 datasheet.
It could be useful to change those parameters that are not directly exposed, and it’s pretty easy to do so by directly calling RPi_AS3935.set_byte(register, value) (just be sure to call RPi_AS3935.read_data() first, and get the current value of the register so you only change the bits you need in it). For the Twitter part of the script, I chose to use the Tweepy module.

I just wanted to write a script that would listen for lightning, then tweet when a storm is happening. So first, to avoid getting false positives, I set the “minimum strikes” parameter to 5 (the sensor waits for 5 strikes in a predefined period before it starts sending IRQs for each subsequent strike). Then I have a handler which is run each time an IRQ is received. If it’s a strike, we tweet about it. But to avoid spamming tons of tweets, I set up a 5 minutes delay : if more than one strike happen during those 5 minutes, I’ll just tweet the number of strikes that have been detected. After 30min with no activity from the sensor, we can declare that the storm is over and tweet people that they should be okay now.

Here is an example tweet (yes it tweets in French, because I live in France. Baguette.) :

The translation would be “/!\ 117 strikes detected in the last 5 minutes. Power of the last strike : 429714 – distance to the head of the storm : 1km“.
As you can see, it was a pretty violent storm, with tons of intra-cloud strikes happening and being detected almost every other second (which is close to the maximum the sensor can detect, since in the datasheet we can read it waits for 1,5s after a strike has been detected and analyzed, before it starts listening again).
The Twitter account is : https://twitter.com/toulouse_orages

I had the chance to set it up right before a period of storms, here in Toulouse. At first I thought it might be crazy because it detected hundreds of strikes every few minutes. But no… it’s been 4 days now and I saw no false positives. The sensor didn’t detect any lightning for 48 hours, and started going crazy anytime a storm was approaching ! So I’m really happy with the results, that are much better than I would have thought from a little sensor like it. Especially since I didn’t take any time to calibrate it properly and mainly used factory settings. I just used the antenna capacitor tuning value given by Embedded Adventure, but it can be a good idea calibrating it again since temperature and other factors can influence it. A way to calibrate the antenna by reading the oscillation speed from the IRQ pin using an Arduino is explained here : as you can see, the process could be easily automatized.

If you’re interested in building your own station, you can find the final Python code for this bot on Github : Github – Hexalyse / LightningTweeter

Feel free to fork it, modify it and hack it to your needs ! If you have any question, remark or observation, do not hesitate to post a comment.

In the previous articles How I reverse-engineered the Ask.fm API – Part 1 and Part 2 we saw how I proceeded to analyze and reverse engineer the Ask FM API so I could automate some tasks.

From there, I decided to implement a basic version of the API, with only a few functions I needed (a lot are missing, like liking an answer, following and unfollowing people, blocking people, etc.). After some time using this ugly code, some people asked me to share my work. I was reluctant to do so for multiple reasons :  First, I’m not sure about the law around reverse engineering, it’s always been a grey area to me. Also, I’m not sure the people who asked me for it would benefit from this code or these articles because they won’t understand anything and won’t know how to use it. And lastly, I didn’t want to share an easy “working as-is” executable, because it would allow script kiddies to spam on Ask.fm because of the absence of captchas when using this.

For these reasons (and for intellectual property matters), I voluntarily stripped off the API secret key from the Java code on the Github repository, otherwise Ask.fm might get angry at me for sharing such a thing. I might contact them and if they’re okay with it, I’ll add it back.

Anyway, enough talk, here is the link to the github repository :

As you can see, there are a lot of things that could be done to improve this code. If you’re interested in contributing, read the README.md file on github, and feel free to send a Pull Request.

In the second part, we’ll take a look at the requests we intercepted thanks to Fiddler, and see if Aks.fm implemented some sort of security (tokens, checksums, etc)

Understanding the request headers and parameters

Here is the request we’ll analyze :

As we can see , there are lots of interesting headers here. I’ll not make you wait and explain directly what I deducted from my tests :

END_OF_DOCUMENT_TOKEN_TO_BE_REPLACED

In this first post, we’ll see how I managed to reverse engineer the Ask.fm API. In a subsequent post, I might give the (ugly) code I came up with, which implements some of the API features I needed for various bots and scripts.

If you don’t already know Ask.fm, it’s a social network where people can create profiles and can send each other questions… and answer it, obviously.

Unfortunately, their website has nasty limitations (Google reCAPTCHA) that prevented me to do what I wanted. But I noticed their application never ask for any captchas. So I guessed it was using a backend API, and if I can use it, I can code bots more easily to automate various tasks (like sending “Group Questions”, a widespread practice amongst ask.fm users). I searched if their API was documented and if they offered developers access to it : they didn’t. I searched the web for people who would have implemented it in any language, and found nothing.

So it was my job to reverse engineer and implement (a basic version of) their API in Python. I will retrace my journey, step by step, of how I finally got to the point of intercepting API calls made from the Android app, to the ask.fm servers.